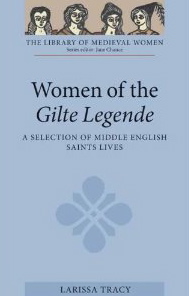 This book is a prose translation of eleven of the lives of female saints from the Middle English version of Jacobus de Voragine’s Legenda Aurea (LgA), one of the most influential books to come from the Middle Ages. The LgA was originally written in Latin in about 1260 but was translated into many European venaculars. It is a measure of its popularity that Caxton should have published a translation of the LgA in 1483. But there are eight more or less complete manuscripts of an earlier Middle English translation, the Gilte Legende (GiL), and three additional manuscripts containing selections which date from the beginning to the latter half of the fifteenth century.

Because of its popularity and its subject matter, the Gilte Legende was widely read and used as an exemplar for conducting everyday life. Part of this included the education of women with the examples set by the earliest Christian martyrs. But that example was not always on of silence and submission. Many of the women saints spoke passionately about their convictions and defended their faith and their bodies to the death. It is their lives which reach through the ages to speak to a modern audience, both academic and non-academic.

The Early English Text Society produced a complete critical edition of the Gilte Legende, edited by Richard Hamer, with the assistance of Vida Russell. But this is the first translation of these lives into modern English, with complete analysis of the role of gender in sanctity and hagiography. So for over 400 years, these amazing stories, in the vernacular, have been inaccessible to a wider audience. This book separates the lives of female saints into four categories, giving one or two examples from each. These categories include: the “ryght hooly virgin”, women who vocally defended their chastity and their bodies against Roman persecution; “holy motherhood”,  a variation on the “holy widows”, mothers who gave up their traditional role to pursue a life of devotion and contemplation; the “repentant sinner”, women who turned from their sinful ways and became preachers, vocal and defiant of a society which said that women should be silent; and the “holy transvestites”, women who cast off their gender and identity to find absolution and salvation. It is their voice which speaks through their compilers and forces us to re-examine the way we look at women in the early Christian period through the Middle Ages.