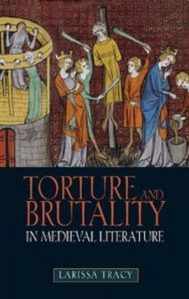 Torture — that most notorious aspect of medieval culture and society — has evolved into a dominant mythology, suggesting that the Middle Ages were a period during which sadistic torment was inflicted on citizens with impunity and without provocation. Figures like Bernard Gui, presented to the twentieth century as the evil inquisitor of Umberto Eco’s The Name of the Rose employing his toys of torture with monstrous delight masked by righteous authority, have imprinted this evil institution on the modern mind. Popular museums of medieval torture displaying barbarous implements like the rack, the strappado, the gridiron, the wheel, and the Iron Maiden can be found in many modern European cities. This barbaric image of medieval torture re-emerged within recent discussions on American foreign policy and the introduction of torture legislation as a weapon in the ‘War on Terror’ during the administration of former-President George W. Bush (2001–2008). The current debate over torture legislation in the United States, and President Barack Obama’s reversal of several Bush administration policies regarding ‘enhanced’ interrogation, has again raised questions about the history and reality of torture in the Middle Ages, particularly its proliferation in some medieval literary genres and its relative absence in others. The body in pain and its representation in art, literature and historical record have created a modern impression of the Middle Ages as barbaric, bloodthirsty and consumed with cruel desire. Many people, non-academics and scholars alike, have formed their image of the medieval period based on a foundational belief that violence was a commonly-enjoyed spectacle, ‘normative’,[1] and that torture was a pervasive part of medieval life.

This book offers a revisionist argument, challenging preconceived ideas about the prevalence of torture and judicial brutality in medieval society by arguing that representations of them in literature are not mimetic. Instead, medieval and early-modern literary depictions of torture and brutality represent satire, critique and dissent; they have didactic and political functions in opposing the status quo. Torture and brutality are intertextual literary motifs that negotiate cultural anxieties of national identity; by situating these practices outside their own boundaries in the realm of the barbarian ‘Other’, medieval and early-modern authors define themselves and their nations in opposition to them.