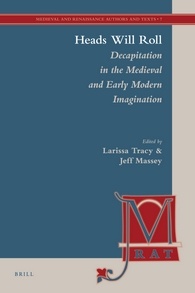 The final cut, the fatal blow: Beheading is one of the most pervasive modes of execution — whether real or imagined — in human history. From the iconic image of Judith sawing off the head of the tyrant Holofernes, to the animated head of the Green Knight in Sir Gawain and the Green Knight, to heads severed on English block and under French Guillotine, to modern photos of captured soldiers beheaded by terrorists, decapitation crosses boundaries of time, culture, and genre while providing spectacular, if ghastly, performative affirmations of power and authority. Modern viewers were horrified when news organizations released footage of Al Qaeda beheading hostages, enacting “time-honored warrior traditions that are theologically sanctioned.”[i] Beheading made headlines again when two men on opposite sides of the world — one on a bus in Canada and one on a beach in Greece — both committed grisly murders by decapitating their victims.[ii] Even more recently, a graduate student at Virginia Polytechnic Institute and State University (Virginia Tech) beheaded a female fellow student with a kitchen knife in front of a room full of people.[iii] These bizarre scenes might seem shockingly surreal products of Hollywood, if not for the very real — indeed, terminal — consequences suffered by the brutally decapitated victims. Regina Janes writes that all such beheadings “horrify the rest of us, populating our prisons, our films, and our fictions. Horror or comedy: decapitation owes its current characteristic shudder to the placement of violence within the modern ideology of the body.”[iv] But public horror at beheading, and its effect on the audience, is not simply a modern phenomenon — decapitation, and the visceral response to it, pervades literary, artistic, and historical accounts in antiquity, the Middle Ages, and the early modern period. Although the modern imagination continues to conceive of beheading as a feature of some monstrously constructed “Dark Age”, audiences have been captivated by the spectacle of the severed head for centuries before and after the medieval period, with no greater, or lesser, fascination.

As a partial corrective to such misunderstanding, this collection samples the multi-valenced motif of decapitation from a multitude of medieval and early-modern perspectives and literary sources, analyzing decapitation and the severed head in terms of cultural mores and expectations both past and present.

“Like a Virgin”: The Reheading of St. Edmund and Monastic Reform in Late-Tenth-Century England — Mark Faulkner, St John’s College, Oxford

“To be a ‘Fleschhewere’”: Beheading, Butcher-Knights, and Blood-Taboos in Octavian Imperator — Renée Ward, Wilfrid Laurier University

The Werewolf at the Head Table: Metatheatric “subtlety” in Arthur and Gorlagon — Jeff Massey, Molloy College

“So he smote of hir hede by myssefortune”: The Real Price of the Beheading Game in SGGK and Malory — Larissa Tracy, Longwood University

“At the time of his death”: The Contested Narrative of Sir Walter Ralegh’s Beheading —  Andrew Fleck, San Jose State University

“Tucked Beneath Her Arm”: Culture, Ideology, and Fantasy in the Curious Legend of Anne Boleyn — Thea Cervone, University of Southern California