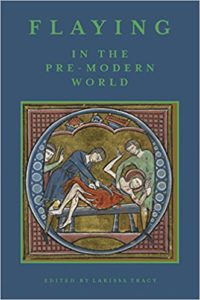 Skin is the parchment upon which identity is written; class, race, ethnicity, and gender are all legible upon the human surface. Removing skin tears away identity, and leaves a blank slate upon which law, punishment, sanctity, or monstrosity can be inscribed; whether as an act of penal brutality, as a comic device, or as a sign of spiritual sacrifice, it leaves a lasting impression about the qualities and nature of humanity. Flaying often functioned as an imaginative resource for medieval and early modern artists and writers, even though it seems to have been rarely practiced in reality. From images of Saint Bartholomew holding his skin in his arms, to scenes of execution in Havelok the Dane, to laws that prescribed it as a punishment for treason, this volume explores the idea and the reality of skin removal – flaying – in the Middle Ages. It interrogates the connection between reality and imagination in depictions of literal skin removal, rather than figurative or theoretical interpretations of flaying, and offers a multilayered view of medieval and early modern perceptions of flaying and its representations in European culture. Its two parts consider practice and representation, capturing the evolution of flaying as both an idea and a practice in the premodern world.