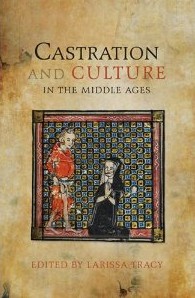 From the roots of history, castration and castrati have been facets of western culture. Castration is a subject of myth, legend, law, literature and theology — the famous early Christian theologian Origen is said to have castrated himself, while the god Kronos castrated his father Uranus to free the children of Gaia in Greek myth. The sweet voices of castrati were praised by the patricians of Rome and audiences of seventeenth- and eighteenth-century Europe; while eunuchs guarded harems and served as advisors to emperors, empresses, and kings. Metaphoric castration pervades a number of medieval genres, particularly the Old French fabliaux — exchanges of power predicated upon the exchange or absence of sexual desire signified by genitalia — but the plain, literal act of castration and its implications are often overlooked.

One of the most famous (or infamous) episodes of medieval judicial brutality and barbarism is the castration of Peter Abelard (1079–1142). Bound up in the intrigue of twelfth-century religious politics, the marriage of Abelard and Heloise (ca. 1101–1164) and Fulbert’s unsanctioned punishment of Abelard’s transgressions captivated audiences immediately after the events and throughout the Middle Ages. The unlawful castration of Abelard, and his autobiographical account Historia Calamitatum, creates a framework for discussing the taboo of male, and occasionally female, genital mutilation—its reception, inception, legal boundaries, ancient origins and early modern legacies. It is within Abelard’s calamitous history that we ground our study on the culture of castration from late-antiquity through the sixteenth century.

This collection explores this grave subject and its implications for cultural mores and custom in Western Europe and seeks to demystify and demythologize castration. The articles in this volume include archaeological studies of eunuchs, historical accounts of castration in trials of combat, the mutilation of political rivals in medieval Wales, Anglo-Saxon and Frisian legal and literary examples of castration as punishment, castration as comedy in the Old French fabliaux, the prohibition against genital mutilation in hagiography, and early-modern anxieties about punitive castration enacted on the Elizabethan stage.

The essays progress from the very concrete, tangible evidence of castration in archeological research, an untapped area of study, to the cultural position of eunuchs and the religious debates concerning physical and spiritual emasculation and self-mutilation, to the legal incidents of and prohibitions against castration, the more interpretative accounts of actual castration as a literary motif, and finally the persistence of medieval attitudes towards castration in early-modern plays juxtaposed against medical texts.

The volume includes my own article: “‘Al defouleden is holie bodi’: Castration, the Sexualization of Torture and Anxieties of Identity in the South English Legendary.”

I. Introduction
A History of Calamities: The Culture of Castration
Larissa Tracy, Longwood University

III. Rooting out sin: Purifying the Body and the Soul

III. Castration as Consequence: Mutilation and the Law

Chapter 9–– ‘He took a stone away’: Castration and Cruelty in the Old Norse Sturlunga saga
Anthony Adams, Colby College

Chapter 10–– The Castrating of the Shrew: The Performance of Masculinity and Masculine Identity in La dame escolliee
Mary E. Leech, University of Cincinnati

VI. Castration and the Culture of Courtly Love

Chapter 14–– The Dismemberment of Will: Early Modern Fear of Castration
Karin Sellberg and Lena Wånggren, The University of Edinburgh