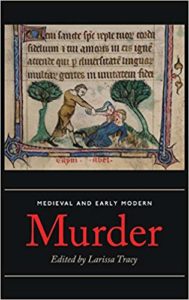 – the perpetrators, victims, methods and motives – has been the subject of law, literature, chronicles and religion, often crossing genres and disciplines and employing multiple modes of expression and interpretation. As the chapters in this volume demonstrate, definitions of murder, manslaughter and justified or unjustified homicide depend largely on the legal terminology and the laws of the society. Much like modern nations, medieval societies treated murder and murderers differently based on their social standing, the social standing of the victim, their gender, their mental capacity for understanding their crime, and intent, motive and means. The three parts of this volume explore different aspects of this crime in the Middle Ages. The first provides the legal template for reading cases of murder in a variety of sources. The second examines the public hermeneutics of murder, especially the ways in which medieval societies interpreted and contextualised their textual traditions: Icelandic sagas, Old French fabliaux, Arthuriana and accounts of assassination. Finally, the third part focuses on the effects of murder within the community: murder as a social ill, especially in killing kin. Larissa Tracy is Professor of Medieval Literature at Longwood University.