Welcome to the website of Larissa (Kat) Tracy, Ph.D., Professor of Medieval Literature at Longwood University in Farmville, Virginia. 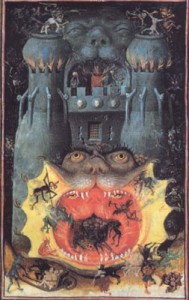 I spent five years in Dublin, Ireland where I received my M.Litt. and Ph.D. from Trinity College, Dublin. During the course of both my undergraduate and graduate studies, I worked as a journalist for a number of newspapers, American and Irish. I taught in the Washington, D.C. area from 2000-2005, and have been at Longwood University since fall 2005. This site encapsulates both my academic/teaching career and my journalism experience, including course materials and conference information.

My main area of specialty, comparative studies of violence, torture, and brutality in literature of the medieval world is the subject of my monograph Torture and Brutality in Medieval Literature: Negotiations of National Identity, published by D.S. Brewer in 2012. Most of my work involves dispelling modern misconceptions about the Middle Ages and interrogating preconceived notions of modernity. To this end, I have published several volumes that consider a specific practice or idea, framed by modern perceptions, and provide detailed, interdisciplinary analysis of the medieval reality. These include: Treason: Medieval and Early Modern Adultery, Betrayal, and Shame (Brill, 2019), Medieval and Early Modern Murder (Boydell, 2018); Flaying in the Pre-Modern World: Practice and Representation (D.S. Brewer, 2017); with Kelly DeVries, Wounds and Wound Repair in Medieval Culture (Brill, 2015); Castration and Culture in the Middle Ages (D.S. Brewer, 2103); and, with Jeff Massey, Heads Will Roll: Decapitation in the Medieval and Early Modern Imagination (Brill, 2012). My first book Women of the Gilte Legende: A Selection of Middle English Saints’ Lives was published by D.S. Brewer in April 2003 and was released in paperback in March 2012. I was the General Editor for Eolas: The Journal of the American Society of Irish Medieval Studies for six years (2013–2019), and I am currently the series editor for Brill’s Explorations in Medieval Culture which has ten volumes in print and nearly a dozen more in progress and under contract.

In the summer of 2016, I was a Visiting Scholar at St. John’s College Oxford, where I spent my days in the Bodleian  and St. John’s Libraries researching medieval manuscripts on literature, law and medicine as part of my ongoing book project England’s Medieval Literary Heroes: Law, Literature, and National Identity. I was also afforded the rare opportunity to look at select manuscripts first hand, including British Library Cotton Nero MS A.x (The Gawain-manuscript) and the Auchinleck Manuscript in the National Library of Scotland.

Over the last few years, I have been interviewed as a guest scholar on NPR’s With Good Reason, participated in documentaries for the Discovery Channel and National Geographic Channel, and been an invited speaker at Oxford University, Duke University, The Catholic University of America, Virginia Tech, Appalachian State University, and Randolph College. I was recently interviewed by Stephanie Clark, host of The Work FM 93.9 show The Frequency of Hope about Treason: Medieval and Early Modern Adultery, Betrayal, and Shame and “Treason: Past and Present” (1 July 2019), and by Danièle Cybulskie, host of The Medieval Podcast (17 April 2019).

I participated in a National Endowment for the Humanities summer teaching institute on Inquisitions and Persecutions in Sixteenth Century Europe and the Americas at the University of Maryland in 2005. In 2003, I participated in an NEH research seminar on Old French Fabliaux and the Medieval Sense of the Comic at Yale University.

My current projects include medieval cross-dressing and execution and exile. I am also editing several conference papers for submission and publication. I also do some work in popular culture, looking at the medieval precedents for modern medievalisms in film and television, like Game of Thrones and Vikings.

In collaboration with Dr. Steven Isaac, I co-organize an annual regional undergraduate conference in medieval studies, Meeting in the Middle: www.longwood.edu/medieval